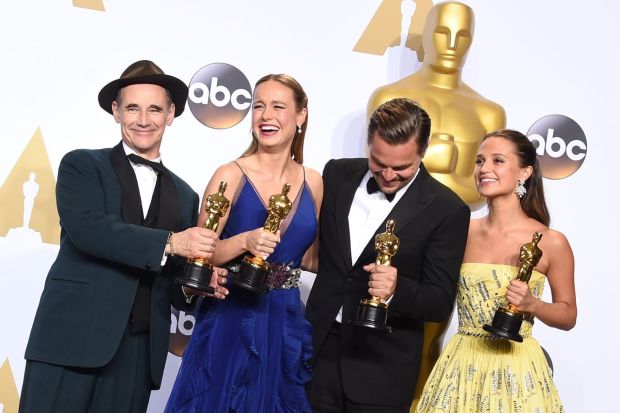 So, the 88th Academy Awards were on last night and overall, I felt the show itself was fantastic.  Chris Rock did an amazing job and confronted the #OscarsSoWhite issue fabulously.  Let’s talk about how I felt about the winners!

I have put all the winners in bold to indicate that I have seen them.

I’ll be honest, I really thought this was going to The Revenant.  Spotlight was the movie this year that had the message and the major issue to confront, but overall, I felt that Spotlight was just an ‘okay’ Best Picture nomination let alone winner.  I am disappointed by this win, but it was still a valid choice for Best Picture.

Excellent choice!  I was so happy that Inarritu won and despite the controversy of how he treated his crew, I still think he deserved the award.  If conditions were harsh and you didn’t like it, then you didn’t have to work on the movie.  That’s how I feel, and although slightly harsh, I am sticking with it.  The crew may have gone through Hell, but sometimes making an amazing final product isn’t easy and you can tell how much work went into this film.

Yes Leo has earned his Oscar, but despite all of the Leo talk, let’s look at the role and the performance.  Having earned it or not, the performance and acting was amazing from Leonardo DiCaprio.  It’s not about him ‘finally’ getting his Oscar, it’s about the best acting winning, and Leonardo DiCaprio’s performance was indeed the best choice.  Leo has been up for the Best Actor nomination several times before, but he wasn’t the best choice – so it has nothing to do with him FINALLY earning it.  This year he won it fair and square.

Brie Larson deserved to win this year for her amazing performance in Room.  No complaints here!

Huge shock here!  Definitely did not see this coming!  I thought it was going to be Sylvester Stallone or Tom Hardy (Hardy was my pick) – so let’s look at this for a second.  Mark Rylance was great in Bridge of Spies, there is no arguing that; however, two actors who should have been the favourites to win were not even nominated this year: Idris Elba and Jacob Tremblay.  So despite them not even being nominated, Tom Hardy was phenomenal in The Revenant, and he STILL did not win.  A huge disappointment considering who could and should have won.

I thought Alicia Vikander would win, but I wanted Jennifer Jason Leigh to win.  Too bad, but at the same time, Alicia Vikander was my second choice and she was fantastic in The Danish Girl.  Two great contenders and there could only be one winner.

The fact that Hateful Eight wasn’t even nominated was a crime to me, but hey, what can you do?  Spotlight was a good movie, but I would have given this to Straight Outta Compton.

The Big Short was a good movie, but wasn’t my choice for the win.  I would have given it to Room.

Best Animated Feature Film: Inside Out

Look, this year this category had all solid nominations, so I can’t complain; however, I can complain that the win went to the most generic and obvious choice.  Inside Out was a fantastic Pixar movie; in fact, it has become one of my most favourite Pixar movies.  My problem is that despite it being an excellent movie, there were better choices for the win, like Boy and the World, or When Marnie Was There.  I bet that most of those voting didn’t even watch them, which is a damn shame because only American-made Disney movies seem to win each year…  I highly recommend watching every single movie in this category, including Anomalisa.  Shaun the Sheep has also become one of my favourites!

Having seen only three out of the five nominated, I can’t say whether or not Son of Saul was the best choice (I saw Son of Saul, Mustang, and Theeb); however, I can say that it was a solid choice.  It truly showed the horrors of the Holocaust in a way we have never seen before.  For that, I applaud it.  My favourite movie was Mustang, but Son of Saul perhaps had more of a stronger message and unique approach to a dark subject matter.

I am VERY upset by this decision considering this was an incredibly weak documentary.  Was it enjoyable?  Yes.  Was it a strong documentary with a lot of thought?  No.  The true winner here was Winter on Fire: Ukraine’s Fight for Freedom because it was relevant, thought provoking, educational, and just very well done.  If you didn’t understand what was going on in Ukraine a few years ago, you sure did after watching this documentary.  Incredible documentary and a damn shame it didn’t win.  I never did end up seeing The Look of Silence, but having seen four of the five nominated, I can pretty much say that Winter on Fire was the true winner here.

Another very frustrating win considering every single one of the rest of the nominations in this category were far stronger.  This was easily the weakest out of the five nominated.  The strongest contenders in this category were easily Shok, Day One, and Everything Will Be Okay.  Stutterer was a good short, but not even comparable to the three I just mentioned.  Ave Maria was actually more enjoyable.  Sigh.

Although I really enjoyed Bear Story, I felt that Sanjay’s Super Team and yes, I’ll admit, World of Tomorrow were stronger.  Bear Story pulls on your heartstrings and leaves you with the feels, but Sanjay’s Super Team was strong because not only was it incredibly enjoyable, it was culturally and religiously diverse.  World of Tomorrow was so strange and abstract, but it left you with a lot to think about and was a lot deeper than perhaps you thought it was.  Bear Story was a good movie, but again, I think the other two I named were stronger.

Finally, an Oscar for Ennio and a well deserved win for a phenomenal and unique score!  Although Ennio was the definite frontrunner in this category and my choice for the win, I am still frustrated that other scores weren’t nominated.  Carter Burwell and Johann Johannsson should not have been nominated, but rather Alexandre Desplat, Michael Giacchino, Theodore Shapiro, or even Hans Zimmer.  At least Ennio won!  What a score!

Best Original Song: Writing’s On The Wall from Spectre / Sung by Sam Smith

None of the nominations in this category were immensely strong this year; however, Lady Gaga’s ‘Til It Happens To You’ is a decent track that has a strong message.  The winner, Sam Smith, was one of the weaker choices and a rather embarrassing win after his dreadful live rendition of the song.  It’s too bad that one of the weakest Bond songs to date had to win the Oscar, but it is what it is.

The movie sounded great and I really don’t have any complaints here!

The Martian and The Revenant were two other strong contenders in this category, but Fury Road was rather deserving.  I think I would have given it to The Martian or The Revenant if I had a say though.

Definitely a solid choice the more I think about it.  I wanted The Revenant to pick this one up, but after seeing Mad Max and giving it some more though, this was pretty amazing make-up wise, so I would have to agree with this win.

Again, no complaints here.  The Revenant would have been another great choice for the win, but Mad Max: Fury Road was more than just accuracy, it was creativity too.  The outfits in this movie were pretty cool.

This HAD to win this category!  Whoever had to edit Mad Max: Fury Road had one HELL of a job because damn, the cuts in this were insane.  It looked like one brutal movie to edit.

A very interesting choice here!  Ex Machina looked great and the effects on the A.I. were incredible, but I still would have given it to Star Wars: The Force Awakens or Mad Max: Fury Road.  To me, they were visually stronger, but Ex Machina still was a good choice!

Overall, the Oscars this year were great, but like each year, there are wins that I am disappointed with and wins that I am incredibly happy with!  Can’t be 100% satisfied!  What did you think?